One way to have your kids follow you is to make parenting fun!

Note: this is a bit of a take-two of a previous blog I made in my old blog site.  The subject matter is the same, but the focus was different (parenting here, while ministry in the other one).
You may have seen this video recently going around the Net, regarding how fun can change behavior for the better.  It’s a very telling video, and one that parents can very well learn from.  Please watch it in its entirety before moving on to the rest of this entry.

The lesson is clear: one way to make things happen is to make it fun; and if ever you are having some obedience issues at home, then maybe you’re not making things fun enough.
I remember this kid who would refuse to drink his milk.  No matter what the parents would do, the child would not budge.  Then one day, the dad decided to turn milk drinking into a game.  There were two full glasses of milk one morning, and to the child’s surprise he was challenged to a milk-drinking race.  After narrowly losing the race to his father, the kid said, “Let’s go two out of three!”
I remember how family friends would be so amazed at how my children would eat vegetables without much fuss.  It was simple, really.  When they were toddlers, I would get them excited (thanks to theatrics on my part) on “colored rice,” which is basically vegetables mixed with their rice.  I would have them cover their eyes until I was through mixing the food, and then presented it with much fanfare.  The kids gobbled it up like no tomorrow.
There was the one time where we had this bug infestation (those ugly black and yellow millipedes) and I’ve just about had it.  We had some bottles of organic pesticides to use on them, and I decided to get the help of my 5 year old son, while having a ton of fun while we’re at it.  We pretended to be two cops or secret agents and the pesticides served as our “pistols.”  We would then do all that Hollywood secret agent stuff: slinking along the walls, communicating to each other only through signs and hand gestures, the whole bit.  We dealt with the bug problem all right, and had a father-son blast as well.
Basically, you can make a chore not a chore if the element of fun is present…and the video showed this clearly.  You just have to think a little out of the box.  Play the silence game to have them keep quiet.  Turn cleaning up into a countdown or a race.
Here’s three more tips on how to make the mundane stuff in the home more meaningful. 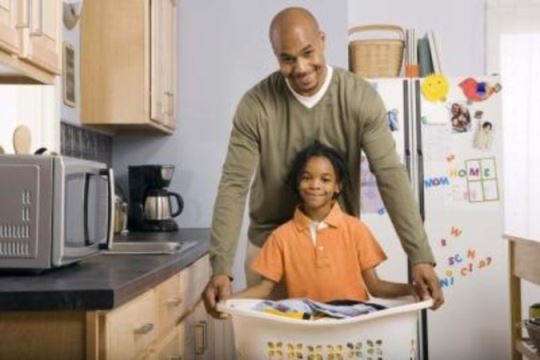 The first is to be in the trenches with them.  One of the things that made Alexander the Great’s troops so loyal to him is how he flew into battle alongside them.  Other generals just hang back and make decisions, but not Alexander…and this impressed his men so much that they were willing to follow and obey him wholeheartedly.
Parents can follow this example and do chores together with their kids.  This sets the example on so many levels.  One, it shows that we don’t just hang back and bark orders, we actually walk the talk.  Two, it shows our kids that they matter to us and we are willing to help them finish tasks and hurdle obstacles.  Three, it shows them that we love their company, and spending quality time with them is a priority.  A lot of magic moments happen when you work alongside your child.
Speaking of setting the example, that’s also the second point.  Another big reason why my kids love to eat veggies is because I do, too.  My kids, I believe, value God more than many of their peers, and it’s because they see my wife and I active in ministry.  In fact, my eldest daughter, only 11, really wants to be in the praise and worship team in our church…and that’s because she sees her mom give much of her time and energy there.
I remember a quote from a parenting seminar I attended: “your actions speak so loudly that I cannot hear what you are saying.”  Actions truly do speak louder than words.

The final point is positive words.  That’s something that many Filipino parents do not do very well.  Very quick and very harsh are the reprimands when mistakes happen; but good deeds go pretty much unnoticed.  This is sad.  No wonder we are such critical people.  We need to learn how to affirm, and it starts with the home.
Ephesians 4:29 – “Let no unwholesome word proceed from your mouth, but only such a word as is good for edification according to the need at the moment that it may give grace to those who hear.”
Trust me, a sure-fire way for a child to resent anything you say is to have that same mouth tear him or her down whenever something is done wrong, and then keep it silent whenever the child does something right.
Not only do we need to affirm through positive words, but we also need to correct positively if mistakes are made.
I could go to great lengths on this one, but this is already a mouthful.  So, in a nutshell: keep it fun, work alongside your kids during chores, set the example, and use positive words often.  You’ll have a much better time parenting your child if you follow these.
Posted by Carlo Manuel Alado at 12:13 AM No comments: Links to this post

Summer is a great chance for kids to do chores

So, April has come and gone…and the “School’s over!!!” euphoria is likely replaced with “I’m bored…when will school be back?”  Is that true with your family?

This is a great chance for them to do chores in the house.  Many Filipino homes, especially in the homes of where I live and in the clients of the school I teach in, have maids or helpers.  But they’re there to do just that, help…not replace.  I even think one of the greatest disadvantages of growing up privileged is that there are servants in the house who wait on the kids hand and foot.

It should not be so.

Instead, kids should hold their weight in the upkeep of the house…in preparation for the houses that they will eventually have when they’re adults.  I try, but unfortunately don’t always succeed, in trying to inculcate this attitude in my children.  Still I press on, even if I sound like a broken record in reminding them. 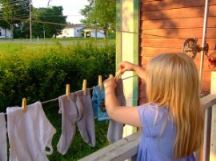 So I looked up what kids can do in the house.  I got the list below from one of my favorite parenting websites out there and so credit goes to them.  I made my kids write the age-appropriate information here as a guide for them.  Let this list serve as a guide for you as well.  It may be obvious, but no child should do these chores every single day.  It’s also good to do these together, as chances are high that they’d enjoy doing it if mommy and daddy are doing it too.

So, onto the list.  Remember, every child matures at a different pace, so adjustments may be made if need be.  This is just a guide, as I’ve said earlier.

Posted by Carlo Manuel Alado at 12:18 AM 6 comments: Links to this post