How materials enhance preschool learning…highlights from an awesome open house.

Every year, as the school year comes to a close, The Abba’s Orchard School does an Open House to showcase what the children have been doing.  While some of the previous AOS-based blogs were done by me wearing a teacher’s hat, this article will be done by me wearing a parent’s hat, as I have my three children enrolled here and I am a huge fan of what the Montessori school is doing. 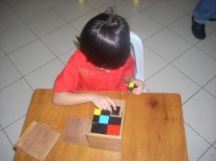 I’d like to start with my son and his classmates, in what they call Casa (the Montessori equivalent of preschool).  I’ll cover elementary and Erdkinder (high school) in future posts. Here is my James (aka Happy) as he handles a Trinomial Cube.  To the uninitiated, it looks like he’s handling a mere puzzle or a bunch of blocks, and as a 5 year old that is indeed what he thinks (and there’s even a cute story that goes along with it). 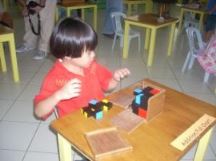 But the purpose of the material is to have the young child learn about trinomials.  Yes, trinomials.  As the child puts the self-correcting material together, he will eventually realize that he’s solving for a trinomial equation.  I don’t know how it’s done, but one of the colored blocks represents a2, the other b2 and the last is c2. 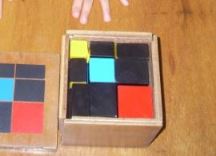 Of course, Happy will not do the pencil and paper work, he just puts the thing together.  But as he gets older, he will start doing this on paper, he will get the concept of trinomials in a flash because he has formed them with his bare hands and it’s much more tangible than simply solving equations.

The presentation of his best friend, Brent also shows how materials enhance learning.  Here he is, doing some work with the beads, materials that Montessori is very known for. 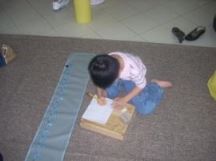 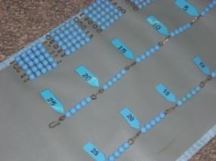 The beads really show the child that if you add 5 to 15 you get 20, and if you add five to that you get 25, and so on.  As you can see, before the child learns how to multiply on paper, he works using the bead materials, and learning is enhanced because it is more real. 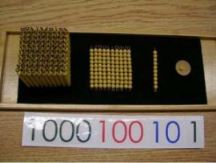 Any number squared is shown in a form of an actual square, and any number cubed is truly in a form of a cube!  When the child wants to make 7 x 5, he just gets 7 pieces of the 5-beads and counts ‘em.  It makes math so much more real, tangible, and (gasp!) enjoyable.

Same with geography.  Not many of us like attaching names to countries…so boring!  But not with puzzle maps, a Montessori staple. 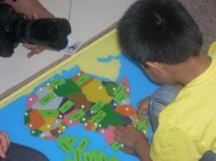 Here, kids put the continent maps together like a fun puzzle and get so engrossed in it.  First it’s simply putting the puzzle map together.  Later on, as seen in the picture, they start to identify the countries.  Below are some more puzzle maps from the casa: 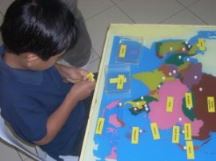 Later in the elementary years, they start putting capital cities into the mix.  It’s so part of them because they put these maps together since they were so small.

One of the most amazing testimonies, from my own kids and from others, is they have grown a LOVE for work, and a love for doing things excellently. 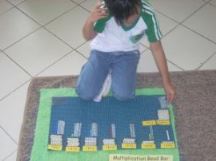 I mean, a child wouldn’t want to leave the table, or the school for that matter, if he can’t finish his Africa puzzle map or the Trinomial Cube…and this desire to finish the job (and finish the job right) rubs off in everything he does for the rest of his life.  No need for forcing or carrot-and-stick rewards.  In AOS, all that is needed is excellence…and what an excellent school to inculcate that in children. 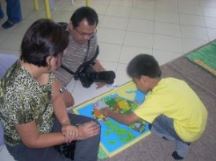 It’s also fantastic how kids as young as casa are trained to present to adults, and their level of confidence and social skills are fantastic.  This is especially evident in the elementary world, which I will cover in a later entry.

Speaking of which, part two of this entry, coming in a few days, will highlight my daughters’ presentations in the AOS elementary classes…including a video on Mesoo’s amazing grammar presentation.  Part three will be on the Erdkinder (high school) side, and here I’ll be wearing my teacher’s hat.

If, as a result of this, you are interested to find out more about The Abba’s Orchard, feel free to comment on this entry or email me at carloalado@yahoo.com.  Oh, you’re in luck, because the school will have a parent orientation this Saturday, May 11, 2011 at 10 AM.  I would very, very strongly encourage you to join this.

There are two campuses here in CDO area, one very near Xavier Estates, and the other (where the parent orientation will be held) is in Alwana Business Park in Cugman (very near Marco hotel).

There’s also two campuses in Manila, one each in Cebu and Davao.  If you live in that area and you’re interested to learn more about the school or wanna inquire of parent orientations, pls feel free to ask me and I’ll find out for you.

Schools are all the same, you might think…and the differences between the good ones and the poor ones have to do with number of students, talent of the teachers, etc.  That may be true for traditional schools, as it’s just a matter of doing the same thing better.

But you also have to look at the method used, and an alternative method like Montessori, and a true Montessori school that is (such as AOS) can make a huge difference, indeed.
Posted by Carlo Manuel Alado at 9:44 AM