Get your sugar-rush on! Attend Monster Kitchen’s Dessert All You Can

I’m not a huge dessert guy; but when it comes to the sweet stuff, I know what I want and won’t stand for anything less than excellent.  For sure, the good people of Monster Kitchen can consistently deliver the goods, and on December 3, 2011 they’ll give you a rare change to get your sugar-rush on by hosting Dessert All You Can at the popular Thai Me Up Restaurant.

What’s in store for you?  Well, for only P250.00, you can be served an all-you-can-eat supply of all sorts of dessert goodness!  Sweet!!   Cakes, cupcakes, cookies, bars, you name it, you’ll eat it.  All these yummy treats will be lovingly prepared for you by Monster Kitchen’s Fundamentals of Baking and Pastry Arts students.

So save the date (December 3, 2011), save the place (Thai Me Up Restaurant), save the time (2:30-7:00pm) and get your sugar-rush on!  Attend Monster Kitchen’s Dessert All You Can!!  For more info, visit their Facebook page.
Posted by Carlo Manuel Alado at 4:57 PM No comments: Links to this post

Email ThisBlogThis!Share to TwitterShare to FacebookShare to Pinterest
Labels: Misc 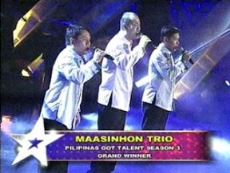 A big congrats to Maansinhon Trio for winning Pilipinas Got Talent season 3.  Without a doubt, this nation makes some of the greatest singers on the planet.

However, Pilipinas Got Talent is not only a singing contest, and, personally, when I watch the show I look for unique talents, not just singing.  That’s why I was rooting for Ruther Urquia and his puppet Titoy during the first season of PGT (I didn’t see season 2, unfortunately).

If you were reading my previous blog, I was also rooting for the non-singer in this contest, El Gamma Penumbra.  They ended up 4th place, as you can see by the opinion results below:

I did not agree with the results, but this is what the nation feels, so what can I do?  If you ask me, here’s how the top 3 of Pilipinas Got Talent should’ve been.

1.  El Gamma Penumbra.  As I said, my pick, especially after watching their awesome performance on the Grand Finals night.  Their final piece reeked of Pinoy pride, and I hope the Department of Tourism will get these guys and put them to good use ASAP.

2.  Muriel Lomadilla.  Yeah, she’s a singer, and her voice was amazing during the duration of the contest.  Her final performance, in particular, was fantastic.  She comes from a family of great singers, in case you didn’t know.  Her cousin is a friend of ours…and is a tremendous singer in her own right.

3.  Renagine Pepito.  Ok, I’m biased on this one, because she’s from my hometown, Cagayan de Oro City.  But, seriously, how many 11 year olds do you know can sing like that?  Her final piece was a bit of a let-down because it’s unfamiliar to most people and it didn’t showcase her vocal prowess as it should’ve.  Her semi-final number was better, and after she performed it, I thought in my heart that she’d not only be in the finals, but she’d be the one to beat, if not the dark horse of the contest.

Special mention goes to Synergy.  They were also a very colorful and entertaining group and my 2nd favorite non-singing entry in the contest.

The other groups were also good, and worthy to be on the final stage of this country’s most popular talent show…but these 4 contestants were the strongest in my opinion.  Oh, and Loverkada Kids?  Man, their performances were too scary to watch sometimes, especially when they swing that kid around.  Yikes!!

Hmmm…what were your pics for the PGT3 plum?  Do you agree with me?  Comments are welcome!

(I hope you enjoyed this article.  I don’t usually talk about these things, since this blog is mostly about parenting, with a bit of Christian living and ministry, marriage, Pinoy patriotism, and others topics aimed to develop the reader’s mind, body, and soul.  If you would like some good, helpful articles on these topics, I would consider it an honor if you follow or subscribe to Lessons Of A Dad.  You can also go to my Facebook page here, and I’m also on Twitter at @lessonsofadad)
Posted by Carlo Manuel Alado at 10:32 PM No comments: Links to this post

Email ThisBlogThis!Share to TwitterShare to FacebookShare to Pinterest
Labels: Misc